The band was honoured to be asked to take part in an event at Beer in remembrance of the men that had left Beer a hundred years earlier to fight in WW1 . We marched to the church followed by serving members of the armed forces and some descendants of the soldiers that were killed or wounded in action. At the church the names of the men were read out to a silent crowd in a movi 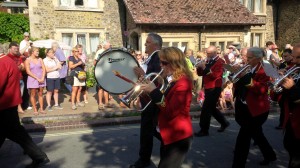 Andrew Harris the bands musical director remarked afterwards “To see all those people gathered around yesterday, many of whom were direct descendants of those men sent off to war and many subsequently killed or wounded in action I found to be a very moving and poignant occasion. For the band to have taken part in this was a great thing to have done”.