The cornets history dates back to the post horn of the late 1500s, an instrument used to sound the approach of the mail wagon. The post horn was gradually lengthened over time, and finally the addiktion of valves in 1828 saw the birth of the modern valve cornet.

Flugel horns were being made as early as 1890 and are basically a bugle with valves, related to the signal horn (a bugle used to signal in battle). It looks very much like a large trumpet or cornet. The word flugel comes from the German word for flank and derives from its use to summon flanks during battle.Flugel horns are used extensivley on the continent and sometimes replace cornets altogether. 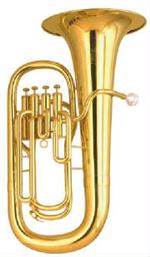 Baritone and Tenor Horn In the 1840s Adolph Sax produced a family of saxhorns which were used by the French army, the Baritone is a descendant of the “saxhorn baryton” the family also included the Tenor Horn.

Euphonium The Euphonium or “Euphonion” as it was called then was introduced in 1843. The name dervices from the Greek word “euphonos” meaning sweet voiced.

Tuba or Bass The Tuba is the lowest pitched of the brass instruments, and along with the Euphonium is derived from the Ophicleide a typoe of keyed Bugle used in the 1800s. The Tuba (Latin for Trumpet) as we know it was patented in 1835.

The Trombone has a very long history. As long ago as the 1500s craftsmen were making Saxbuts, which worked on the same principle as the modern Trombone.